Because The LEGO Company get paranoid about this sort of thing let me make it clear that I have no affiliation with them, that my views are my own and do not necessarily represent theirs, and so on. So if you think any of this is official you are as deluded as they are.

With apologies to Scott Adams. 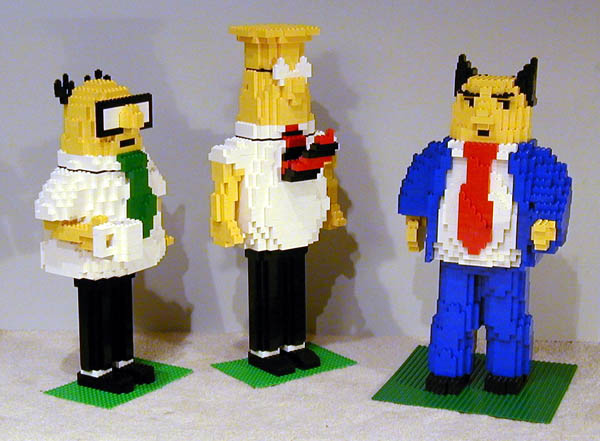 Dilbert was my first attempt at anything which could be described as LEGO sculpture. It took just over 3 1/2 hours from sitting down  with a book of Dilbert cartoons and my lego bricks to finishing this (first) version. I'm not happy with the arms or the bottom of the shirt, but overall I'm pretty pleased with it.

I used no slopes - that would be cheating :-) There are a handful of plates (for the spectacles and collar line) but otherwise all the bricks come from the ubiquitous blue tubs.

The Pointy-Haired Boss took much longer - about 8 or 9 hours. There's less symmetry to exploit and the curves are much more complicated. Again, it's all basic rectangular bricks except for a handful of plates (around the eyes).

Wally took about six hours - he's simpler than the Pointy-Haired Boss, but I had to be rather creative with my increasingly limited supply of white 2x3 and 2x4 bricks. I'm much happier with his body shape than with Dilbert's - I think it's clear that I was better at this by now than when I started out making Dilbert. I'm
still not satisfied with the arms though.

My wife Lesley likes them so much that she says I shouldn't take them apart, so I must go and buy some more LEGObricks. Well, who am I to argue?

I think I'll make Dogbert next - but first I need to get some more white bricks...

The pictures on this page are Copyright © A. Lipson 2000

LEGO ® is a trademark of The LEGO Group, who have nothing to do with this or any of my other LEGO-related web pages.
DILBERT Characters © United Feature Syndicate, Inc. Reproduced by permission of UFS and Scott Adams